We may be inclined to think of orthodontic treatment in terms of straightening the teeth and or adjusting the forwards- backwards relationship of the teeth.However in children and teenagers a very common orthodontic procedure is sideways expansion of the upper teeth. Expanders are used in orthodontics for the following reasons, to correct posterior crossbites, to provide space to reduce crowding,and to broaden the overall width of the arch. Sometimes in milder cases the archwire (the wire associated with fixed appliances (railway tracks)) will  achieve the required amount of sideways expansion. In these circumstances no additional benefit is conferred (on the patient!) by overexpanding or by fitting an expander. 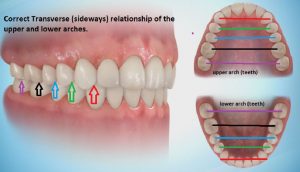 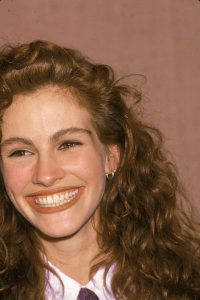 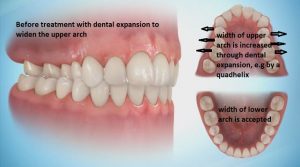 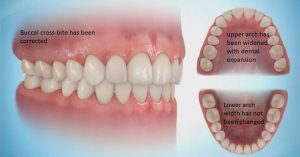 The upper jaw or palate consists of 2 halves , the 2 halves are ultimately joined in the midline by a suture , the age at which the midpalatal suture fuses is highly variable, generally one is safe in assuming that it has not fused by 15 years of age. 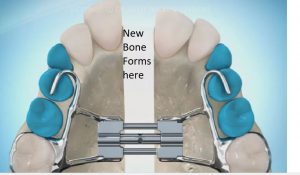 This picture shows the palate separating into 2 halves, it is then held in this position while new bone forms and fills in the space where the two halves separated.

When does the midline suture of the palate fuse?

Research suggests that there is enormous variability as to the age at which the suture fuses , a rough rule of thumb is 15-16 years for girls and 17-18 years for boys. In girls who are less than 15-16 years old , and boys who are less than 17-18 years old,as the midline suture or growth plate is not closed, expanders will achieve skeletal expansion , that is an increase in the bony width of the upper jaw (palate). 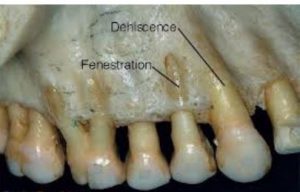 What if we require skeletal expansion in an adult?

Adults of course often require expansion , to correct posterior crossbites, to provide space to reduce crowding,and to broaden the overall width of the arch. Sometimes in milder cases the archwire (the wire associated with fixed appliances (railway tracks)) will  achieve the required amount of sideways expansion. In these circumstances no additional benefit is conferred (on the patient!) by overexpanding or by fitting an expander. Sometimes dental expansion for instance with a quadhelix may provide sufficient expansion in an adult. 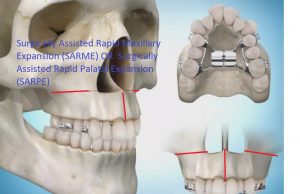 This procedure is performed by an oral and maxillo-facial surgeon , normally as a day stay procedure. It is all performed inside the mouth , therefore there are no visible  scars. It involves making cuts  through the side of the upper jaw bone above the top of the roots of the teeth, a cut is also made in the middle of the palate between the top of the upper front teeth. The patient then slowly expands the hyrax appliance until the necessary expansion has been achieved. Because this is skeletal expansion a gap will appear between the upper front teeth. This will close with time. 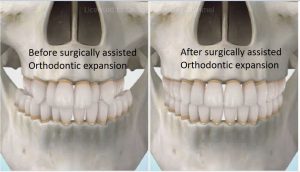 Orthodontic appliances e.g. braces are used to move the teeth into the desired position once sufficient width of the upper jaw has been achieved.

This orthodontic blog was written by Dr  John Buckley,who is a specialist orthodontist at Clonmel Orthodontics in Clonmel County Tipperary,  Ireland.He is both Clonmel’s most qualified and most experienced orthodontist.

Clonmel Orthodontics provides orthodontics to county Tipperary and the neighbouring counties of Waterford, Kilkenny, Limerick,Cork , and beyond.

This website uses cookies to improve your experience while you navigate through the website. Out of these, the cookies that are categorized as necessary are stored on your browser as they are essential for the working of basic functionalities of the website. We also use third-party cookies that help us analyze and understand how you use this website. These cookies will be stored in your browser only with your consent. You also have the option to opt-out of these cookies. But opting out of some of these cookies may affect your browsing experience.
Necessary Always Enabled
Necessary cookies are absolutely essential for the website to function properly. This category only includes cookies that ensures basic functionalities and security features of the website. These cookies do not store any personal information.
Non-necessary
Any cookies that may not be particularly necessary for the website to function and is used specifically to collect user personal data via analytics, ads, other embedded contents are termed as non-necessary cookies. It is mandatory to procure user consent prior to running these cookies on your website.
SAVE & ACCEPT