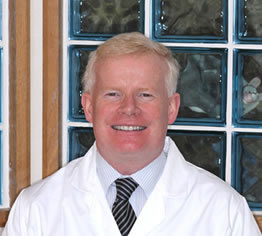 Dr John Buckley is both Clonmel’s most qualified and most experienced orthodontist who is in practice.

He has been practising as a registered specialist orthodontist since 1994.

Orthodontics and the quality of aesthetic result which the patient finally achieves is very much his passion. Orthodontics has evolved as a specialty to where, not only straight (aligned ) teeth are considered important , but also prioritising the beauty of the smile and enhancing the facial appearance where possible through orthodontic treatment.

He holds the following qualifications:
In 2012 he was awarded an M.Sc in Lingual orthodontics from the University of Hannover Germany. He was the first orthodontist in the island of Ireland and the second in the British Isles to receive a masters in lingual orthodontics.

Dr Buckley established a specialist orthodontic practice in Clonmel County Tipperary in 1996, having returned from postgraduate training in the U.K.

He subsequently worked for a year as a general duties house officer in Cork Dental Hospital.

In 1988 he commenced a residential post in oral and maxillo-facial surgery in The Bristol Royal Infirmary and the Bristol Dental Hospital.

He then took a post as resident senior house officer in oral and maxillo-facial surgery in University College Hospital London.

This was followed by a post as resident senior house officer in paediatric dentistry and oral and maxillo-facial surgery in the Hospital for Sick Children Great Ormond Street London.

He then moved to Newcastle Dental Hospital for a further year, where he joined a rotational post which involved working in the departments of paediatric dentistry , periodontics , and conservative dentistry.

In 1991 he commenced a three year specialist orthodontic programme in Cardiff Dental Hospital University of Wales.

Between 1995 and 2001 Dr Buckley worked as a part time lecturer in the Departmentt of Orthodontics in Cork Dental Hospital when he was not working in his practice in Clonmel.

He was an internal examiner in Orthodontics for the final year dental students for the BDS NUI exam. He has lectured in Ireland and the U.K. on various orthodontic topics , and has published articles in refereed orthodontic journals.

He has held the post of Secretary of the Orthodontic Society of Ireland , and was President of the South Eastern branch of the Irish Dental Association.

Dr Buckley is committed to his ongoing orthodontic education and regularly attends both national and international conferences on orthodontics.

Orthodontics and the achievement of excellent orthodontic results is very much his life’s work.